AFT Fathom and AFT Arrow both have the powerful ability to model heat transfer in pipes and heat exchangers, allowing you to represent these critical features of temperature-sensitive systems in your hydraulic model. However, without being able to see the affect heat transfer has on an entire system these features would be of limited usefulness.

One of the most powerful aspects of AFT’s implementation of heat transfer is that energy is balanced across the entire system. For example, you can observe changes in pump or control valve operation when adding heat transfer to a remote part of a system.

Looking at the system below, it is straightforward to understand what the overall temperature behavior will be – the heat exchanger adds a large amount of energy all at once and the pipes slowly lose energy to the environment.

The thermal behavior of such a non-branching system could be solved by hand or with a program like Excel. But what happens if we add some additional complexity? We add a second heat exchanger and let some amount of flow through it.

We know the temperature still decreases along the pipes due to convection, and increases across the heaters. But what happens when the flows rejoin? All we can say for sure is that the temperature will settle somewhere between the two stream’s temperatures. If we knew the system hydraulics, this would be relatively easy to calculate by hand.

Unfortunately, changes in fluid temperature also change the fluid’s viscosity and density, thus changing the hydraulic behavior. There is no way to separate the two problems and they must be solved in parallel, making this system much harder to solve even with a well-developed spreadsheet calculator.

Below is a model of just such a system. A small resort is willing to commit significant upfront costs to build two eco-friendly temperature-controlled pools. The water will be heated with a large rooftop solar collector will be built, and a closed geothermal loop will be included to cool the water. The cold and hot streams are then mixed to the appropriate temperature and delivered at the necessary flow rates for the decorative but functional fountains. 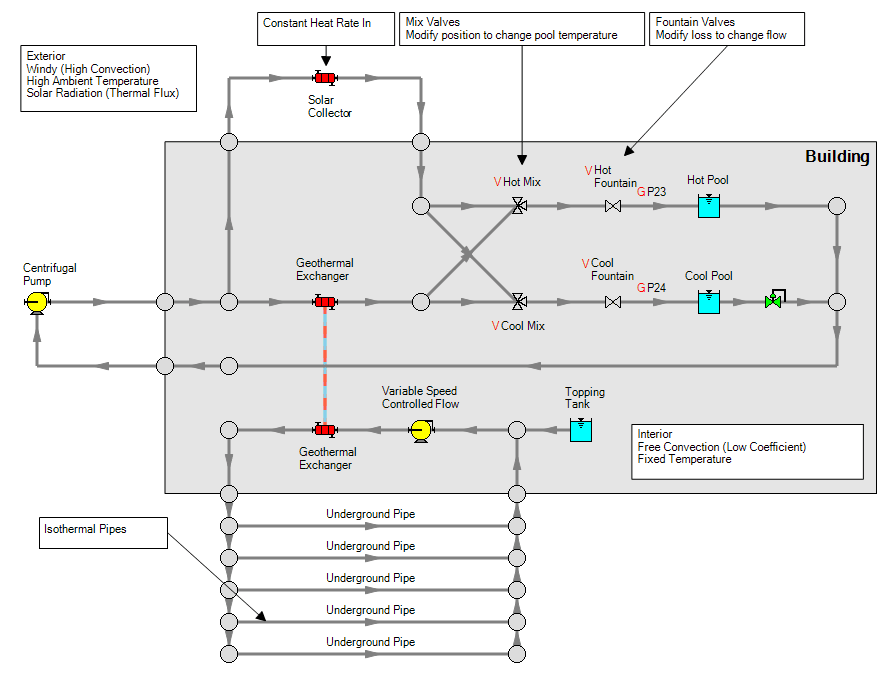 As you can imagine, this would be an extremely difficult task without an iterative solver like AFT Fathom. In fact, it is difficult even for AFT Fathom when compared to the typical model – it takes careful configuration and several thousand iterations when many models are solved in hundreds or even just dozens of iterations. 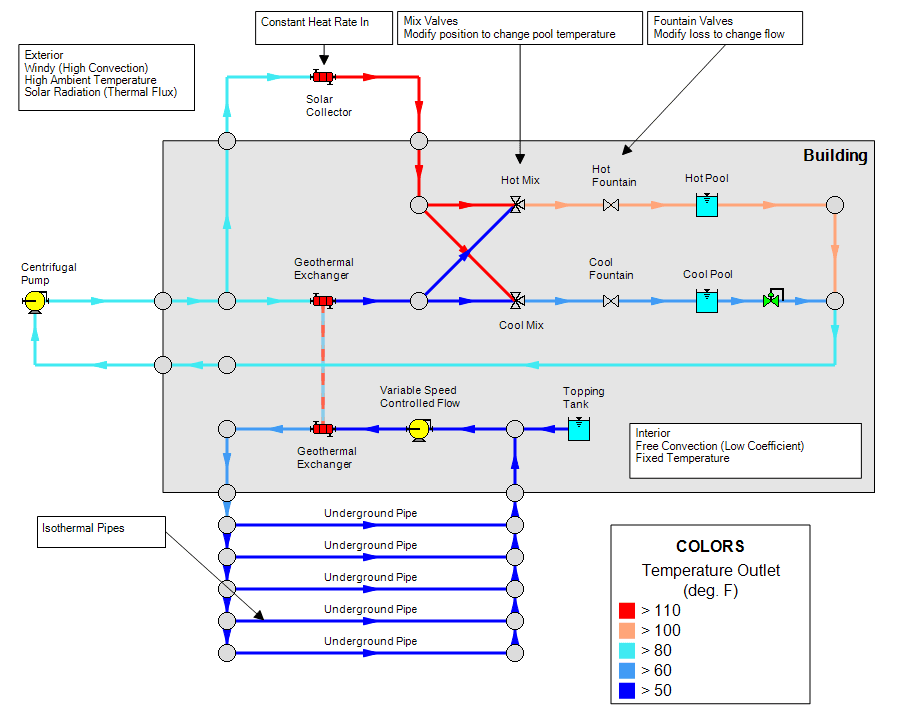 AFT Fathom can tackle this problem because it balances energy system-wide. In one solver “pass” AFT Fathom iterates to find balanced pressure, flow, and temperature solutions. Each of these components affects the others, so all three must be iterated on repeatedly. During the temperature iteration, temperatures are updated to conform not only to the individual thermal models at pipes or heat exchangers, but also at every branch or combination of flow. The total amount of energy entering a branch must equal the energy leaving:

By iterating on temperature to enforce this requirement for every branch, a system wide energy balance is obtained.

With the ability to model multiple types of heat transfer in pipes or heat exhangers - as described in Erin's Heat Transfer in Pipes and Abby's Heat Transfer in Heat Exchangers blogs - along with the system energy balance, the resort can directly model the thermal behavior of their system and the positions of valves necessary to reach target temperatures. Even with an otherwise fully-featured hydraulic solver this would be a challenging problem without the inclusion of energy balance!

How to Fill as Quadratic

It’s the Economy, Stupid. Or Is It?

Moving a Junction Without Moving the Pipe

We would like to help get your model up and running - if you send your model along with some more details about the problem to support@aft.com we would be happy to address your question.

Cancel Reply
Hi Alan, We would like to help get your model up and running - if you send your model along with some more details about the problem to support@aft.com we would be happy to address your question.
Cancel Update Comment