Welcome to the Applied Flow Technology Blog where you will find the latest news and training on how to use AFT Fathom, AFT Arrow, AFT Impulse, AFT xStream and other AFT software products.
Categories
Tags
Authors

AFT Fathom and AFT Arrow both have the powerful ability to model heat transfer in pipes and heat exchangers, allowing you to represent these critical features of temperature-sensitive systems in your hydraulic model. However, without being able to see the affect heat transfer has on an entire system these features would be of limited usefulness. One of the most powerful aspects of AFT’s implementation of heat transfer is that energy is balanced across the entire system. For example, you can observe changes in pump or control valve operation when adding heat transfer to a remote part of a system. Looking at...

Modeling Tube Side & Shell Side of a Heat Exchanger

It is possible to model the shell side and tube side of a heat exchanger in AFT Fathom and AFT Arrow where the “hot fluid and cold fluid” circuits can also be included for both sides of a heat exchanger in a single model file!  This can be accomplished by creating a "thermal link" between two heat exchangers and using the “Heat Transfer with Energy Balance (Multiple Fluids)” option in the System Properties window.

First step is to build a model of the system and include both cooling water and hot oil loops.  After all the pipes and junctions are laid out on the Workspace (but not defined), open up the System Properties window and choose the "Heat Transfer with Energy Balance (Multiple Fluids)" option as displayed in Figure 2.  A single “default” fluid must be selected and defined.  The individual fluids used in each loop will be defined soon. 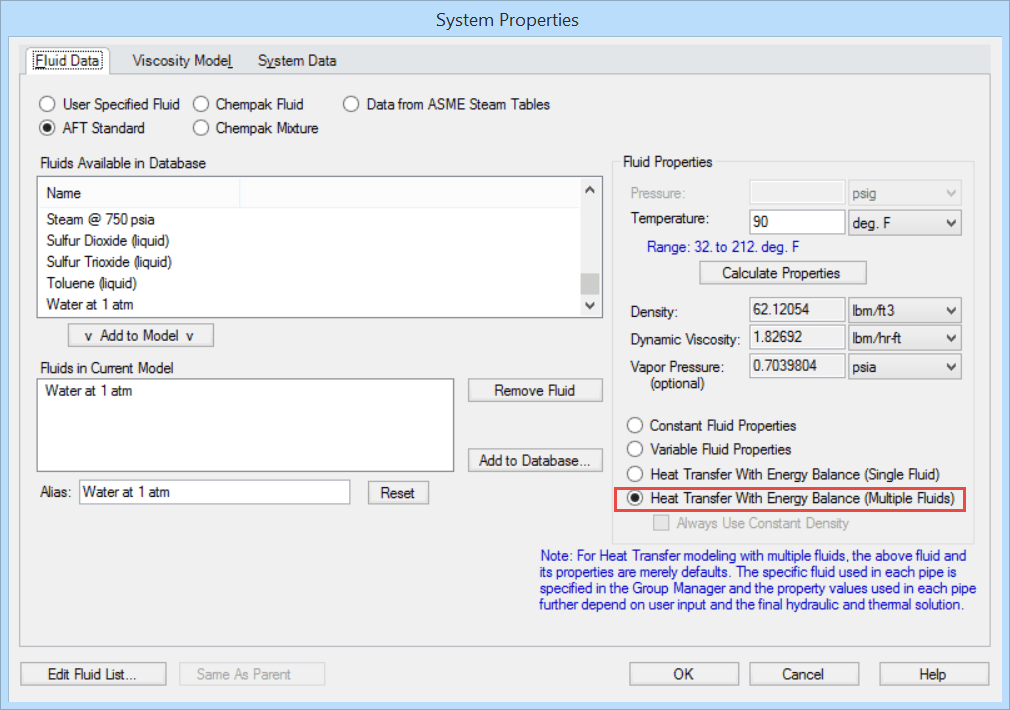 Next, the pipes and junctions can be defined with their various thermal models and characteristics (except for the two heat exchanger junctions that will need to be modeled as two sides of one heat exchanger. This will be specified later).

In order to use the "Multiple Fluids" option in System Properties so that two sides of a heat exchanger can be thermally linked, "Fluid Groups" must be created.  Before fluids can be assigned to specific “Fluid Groups”, separate groups of all the pipes and junctions in each individual circuit need to be created first.

Then, select the pipes and junctions that make up the hot oil side. With those objects selected, click "Edit", then "Groups", then "Create" and give the hot oil loop a name.

After two separate groups for each loop have been created, the specific fluids that will be used for each group can now be defined.  Click "Edit", then "Groups", then "Fluids".  Check both boxes so that both fluid groups can be used.

Then, specify the fluid properties for the hot oil loop by clicking on its box with the little dots.

After a particular fluid has been chosen for each fluid group, click OK.

Now, the two heat exchangers can be "thermally linked" together.

Open one heat exchanger, and on the Thermal Data tab, specify one of the Effectiveness-NTU thermal models, then check the box to "Link to Heat Exchanger", and select the other heat exchanger from the drop-down menu that you want to link to. Then specify the required parameters.  Figure 6 illustrates how to thermally link the cooling water loop tube side with a “Counter-Flow” thermal model and it will link to the Hot Oil Loop heat exchanger.

Balance Energy At Junction … What?

AFT Fathom has the ability to model heat transfer. The default mode (found in system properties) is “Constant Fluid Properties”. To avoid confusion in the default mode, several of the heat transfer input fields and option boxes are invisible or disabled until one of the following heat transfer modes are employed:  Heat Transfer With Energy Balance (Single Fluid)Heat Transfer With Energy Balance (Multiple Fluids) Upon selecting one of these heat transfer modes, the user may notice an option box labeled “Balance Energy at Junction”; found at the lower left of the first tab in the properties window for the Assigned Pressure...