Welcome to the Applied Flow Technology Blog where you will find the latest news and training on how to use AFT Fathom, AFT Arrow, AFT Impulse, AFT xStream and other AFT software products.
Categories
Tags
Authors
Font size: + –
Print
4 minutes reading time (803 words)

In the modern world there are many things we take for granted – especially in first-world countries. Among them are the reliable availability of water and electricity. To our homes. To our workplaces. Just about everywhere.

Engineers also take things for granted. One of those is reliable data on the properties of steam and water. But it was not always this way. So, 100 years ago ASME began a project to develop steam tables. Read on to learn more!

Historically, a driving reason for collecting authoritative data on steam was power generation. An excellent article (A Century of ASME Steam Tables) was recently published on ASME's history developing the steam tables. It is worth a read. Here I will summarize some key highlights.

Back in the 1920's the engineering community had a problem with steam data. Interestingly, the problem was not too little data but too much. There were numerous sources of steam data that did not always agree with each other. Which was correct or most reliable? The first meeting to start answering this question happened on June 23, 1921, in Cambridge, Massachusetts. As ASME had formed in the 19th century for the specific purpose of improving the dreadful safety record of steam boilers, ASME was a natural fit to take on steam properties.

According to the ASME article linked above, the first "skeleton tables" were assembled in 1934. This quickly evolved into a book published by Keenan and Keyes in 1936: Thermodynamic Properties of Steam; Including Data for the Liquid and Solid Phases. The Keenan and Keys book was the standard source of steam data for decades.

A few things happened after that. One was the trend towards ever higher pressures and temperatures in industrial systems in general and power generation systems in particular. This led to a need to expand the steam tables to larger ranges. Along the way it became clear that the steam tables provided equally important data on water.

Another trend was the introduction of the digital computer. The computer started to become common in engineering practice in the 1960's and especially the 1970's. This led to a need to have programmable equations (rather than printed tables) for steam and water. Further, these equations needed to be computational efficient.

One other important trend was globalization. Engineers around the world should be using the same data for steam and water. So, in 1967 a standard was created by the International Formulation Committee called IFC-67. This divided steam/water data into six regions of temperature and pressure. IFC-67 was the basis of the first official ASME Steam Tables.

The current steam tables have two versions. One is to reflect precise scientific knowledge of steam and water, and the other is for use with digital computers. In 1995 the first version was created by the IAPWS (International Association for the Properties of Water and Steam). It is aptly called IAPWS-95.

The second version was to meet the needs of industry and is called IAPWS-IF97. The "IF" in IF97 stands for "Industrial Formulation". This formulation sacrificed a small amount of accuracy for 2-3 orders of magnitude faster computer calculations.

By the time of these latest formulations were made available, AFT had been founded (1994) and we were still a very young company. We incorporated IAPWS-IF97 version of the ASME Steam Tables in AFT Arrow 3 in year 2002. This data is also used in our new AFT xStream (2021) software for steam and gas transient simulation. The water data in the ASME Steam tables made its way into AFT Fathom 6 in 2002, and AFT Impulse 4 in 2007.

Beginning in 1995 AFT offered a standalone tool for steam and water thermophysical property calculations called AFT SteamCalc. In the last 1990's we released a version with the new ASME Steam Tables from 1997. Two years ago this month we decided to stop selling AFT SteamCalc as a separate product and just bundle it in all of our pipe flow software. See this blog Transition of Chempak and SteamCalc. In case you were not aware of that, you can find this on the AFT Arrow Tools menu. See below in Fig. 1. It is also on the Tools menu of all AFT software products. It launches AFT SteamCalc (Fig. 2).

Well, there you go! A history of steam data and how we got to where we are today! And if you use AFT SteamCalc or something similar, you can get steam on your windows – Microsoft Windows, that is. 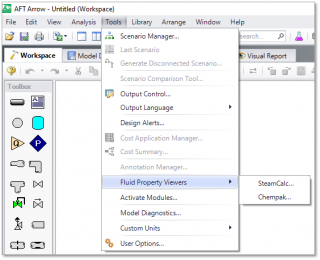 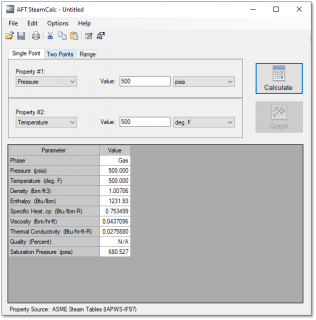