Welcome to the Applied Flow Technology Blog where you will find the latest news and training on how to use AFT Fathom, AFT Arrow, AFT Impulse, AFT xStream and other AFT software products.
Categories
Tags
Authors
Font size: + –
Print
9 minutes reading time (1739 words)

To Affinity and Beyond!

Pump manufacturers often supply performance curves at a specified speed. While this is useful when the pump only runs at that rated speed, performance changes when the pump has a Variable Frequency Drive (VFD). A VFD changes the shaft speed, which, in turn, changes the performance curves. If the manufacturer only supplied a curve at a single speed, how can you know how the pump will perform when it operates at a different speed? Using the Affinity Laws, we can find the answer. This is how AFT Fathom and AFT Impulse automatically adjust pump curves to new speeds or to reach a user specified setpoint. In this blog, we will explore how the Affinity Laws apply to each parameter in a pump curve.

While one may want to apply the Affinity Laws to compressor curves, the laws are not always accurate at high compression ratios or at low Mach numbers in the compressor itself. For simplicity, the example and discussion in this blog will discuss the Affinity Laws as applied to only pump curves.

A centrifugal pump is a piece of equipment that imparts energy, in the form of head, to a flowing liquid using a spinning impeller. Two parameters that affect the head rise that a pump adds to a fluid is the speed that the impeller is spinning and the fluid flow rate. Pump manufacturers supply a curve to help engineers ensure that the expected head rise that the pump will supply is suitable for the system.

The manufacturer's curve shows the head rise that the pump will provide as a function of the flow rate through the pump. Typically, at low flow rates, pumps supply a higher head rise and low head rise at higher flow rates. Each flow rate has a unique head rise that will result from the pump. Additionally, the manufacturer's curve can include NPSHR and Efficiency or Power curves as a function of flow rate. These curves are specific to the rated speed of the pump. Sometimes the manufacturer will supply a variety of different curves for different pump speeds. But it is common for a pump curve to only display a single curve at the rated speed.

How can we know how the pump will perform when operated at a speed other than the rated speed? It is not practical to take the pump out of service then evaluate it at a variety of speeds to generate a head rise versus flow rate curve at each speed. Instead, we can use a concept called the Affinity Laws to estimate the pump performance at speeds other than the design speed. It is important to note that the Affinity Laws are only an approximation, and if pump manufacturers have performance data for different pump speeds, use those values instead.

To use the Affinity Laws, we will use a ratio to compare the design impeller speed, N1 to a new operating speed, N2. N1 and N2 can represent either the speed in revolutions per minute (rpm) or simply the speed relative to the design speed, where 100% is the design speed.

Using this ratio, we can manually adjust pump curves to see what the flow rate, head rise, and power are at any speed.

We will use a pump curve and apply the Affinity Laws to it to see its performance when operated at different speeds. The data below is the data provided by the manufacturer at the pump design speed, which we will refer to as 100% speed. 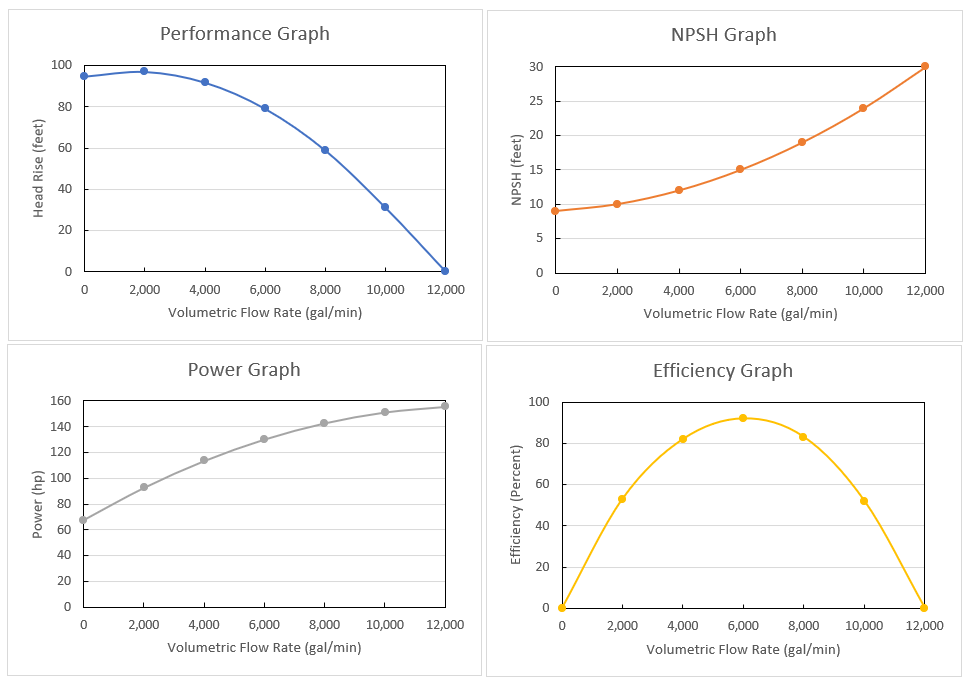 Note: The Pump Configuration window in AFT software only allows entry of either Power or Efficiency data, but not both, because one can back calculate efficiency from power data and vice-versa. However, to show how the Affinity Laws apply to all parameters, we are including both power and efficiency.

Rearranging this equation and substituting in for s, we get

This flow rate will be the first non-zero data point for the reduced speed pump curve. This new flow rate should make sense intuitively because a decreased pump speed will result in a lesser flow rate.

Next, adjust the head rise for the new speed. This calculated head rise will be the head rise at the adjusted flow rate calculated previously. The Affinity Laws state that the head rise adjusts with the following equation, using the same 1 and 2 conventions already established. This law applies to both head and pressure rise.

Next, adjust power. The Affinity Laws state that power adjusts with the following equation:

Finally, adjust efficiency. The Affinity Laws state that the efficiency adjusts with the following equation:

Repeating this process for each data point in the pump curve set, we can obtain a new pump curve for the pump running at 90% speed. 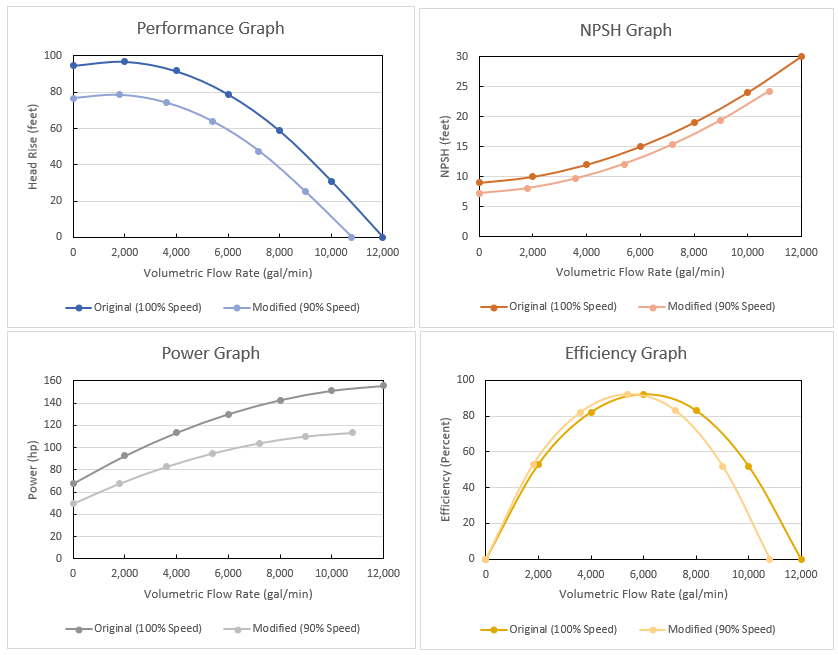 We can go further and use the Affinity Laws to generate the head rise and power curves at a variety of different speeds. With a series of pump curves at various speeds, we can see what speed the pump needs to operate at to get a desired flow rate or head rise from the pump. 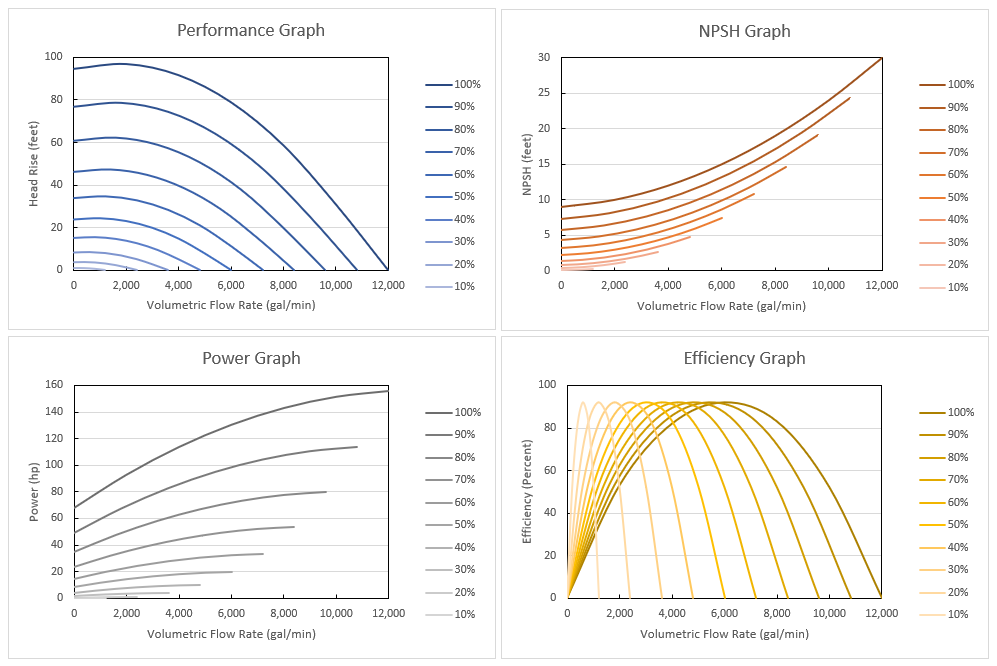 Using the Affinity Laws to calculate curves at a variety of different pump speeds may seem like time consuming work, especially if you are not sure what speed you want the pump to operate at. This is where AFT applications can save you time. All AFT applications will automatically apply the Affinity Laws to the entered pump curves. To do this, go to the Variable Speed tab of the Pump Properties window. There is a field to change the Fixed Speed of the pump. By default, this is 100% because of the assumption that the entered curve is at the rated speed. Change this to 90% and go back to the Pump Model tab. Looking at the graph preview, the properties window automatically displays a modified head or pressure rise curve, shown in dark blue in the figure. The same goes for the NPSHR, power, and efficiency graphs. 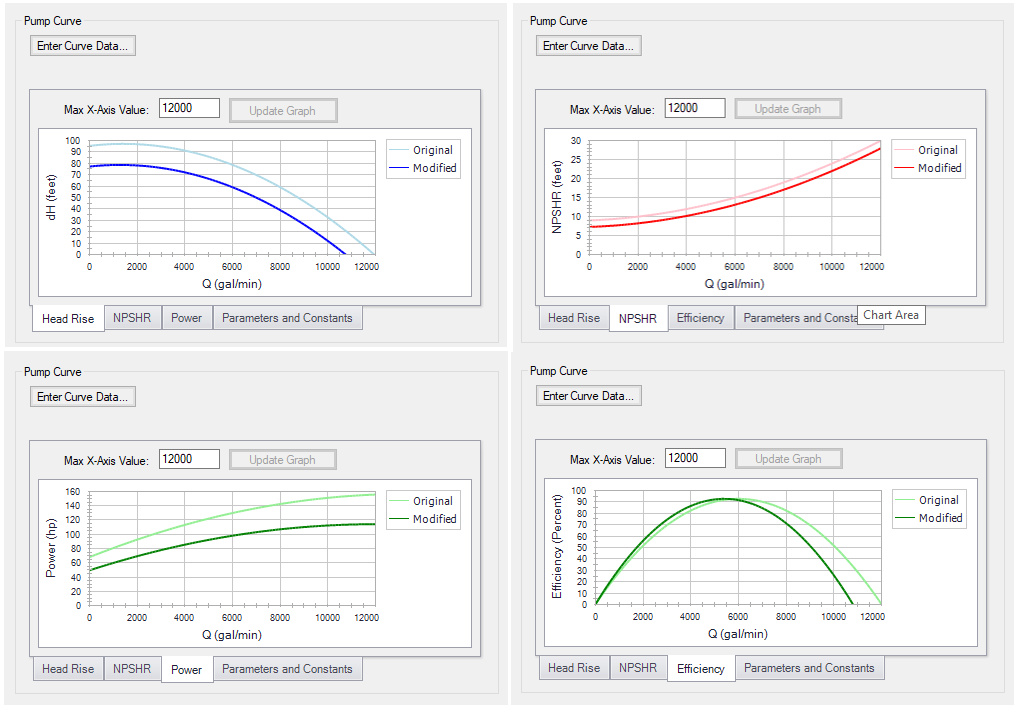 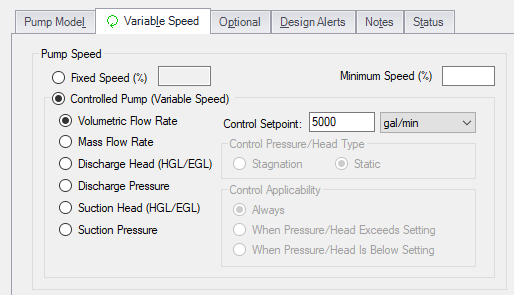 As you can see, the solver (AFT Fathom in this case) obtained a speed of 88.77% to achieve the volumetric flow rate setpoint of 5,000 gal/min. Additionally, AFT Fathom calculates the adjusted head rise, NPSHR, efficiency, and Power using the Affinity Laws and shows these values in the output at the new pump speed.

The control options offer more selections than just volumetric flow rate. Mass flow rate, discharge head, discharge pressure, suction head, and suction pressure are all available parameter options. Regardless of the parameter selected and entered, the solver operates similarly – the solver alters the pump speed, modifies the pump curve using the Affinity Laws, then checks to see if the solution meets the setpoint. If the solution does not meet the setpoint, the solver will keep repeating until it reaches the desired setpoint.

Although it may sound simple to just enter the rated pump curve and desired setpoint then let the solver do the rest, it is important to understand how the Affinity Laws work and how to apply them when obtaining hydraulic results.

Kyle Clark is an Applications Engineer. He is a graduate of Texas A&M University - College Station with a Bachelor's degree in Chemical Engineering. Kyle came to AFT from ExxonMobil where he worked as an Offsites & Utilities Engineer in their Project Development Division. At AFT, Kyle supports AFT users around the world to troubleshoot models, help test and document software, and much more.

More posts from author
Monday, 17 January 2022 How does AFT Impulse model cavitation?
Monday, 16 August 2021 Get the Most Out of AFT's Fluid Property Viewers
Friday, 30 April 2021 The Eductor Educator