Jan 17 Posted by Ben Keiser in Tips and Tricks

If you have not had a chance to read the previous blogs, please be sure to do so to get a better pre-requisite understanding of pump and system curves and how AFT Fathom generates them. Here is where they can be found.

Let's start the discussion with multiple pumps in series configuration. In Figure 1 below, there are two pumps in series, separated by 3,000 feet of piping with an overall system elevation change of 200 feet. As you can see, the pumps are different with different pump curves. Both have 9-inch impellers, but one operates at 3,179 rpm while the other operates at 3,550 rpm. 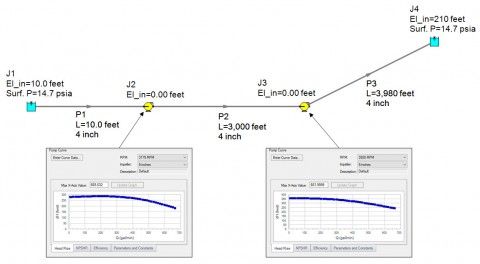 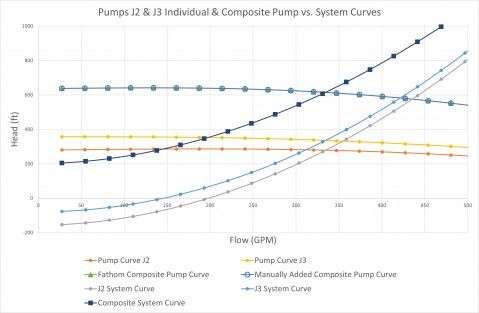 Now, let's focus on the system curve side of things for the plots in Figure 2. There is a system curve plotted for pump J2 as well as for J3. The way these two individual system curves are obtained is by setting one pump to a pseudo-fixed flow pump and running the model in the background over a range of flows and calculating the required pump head. This process generates the system curve for that specific pump. Keep in mind that during this process, the other pump is simply operating on its curve. Just like how AFT Fathom generates system curves as discussed in the previous blogs in this series.

The composite system curve is slightly different. We only need to use one of the pumps in series to generate the composite system curve. One of the pumps is set to the pseudo-fixed flow model while the other pump takes on a special condition called "Pump Off with Flow Through". This special condition basically ignores the pump for modeling purposes and the pump acts like a Branch junction. Therefore, when the system curve is generated for just one of the pumps and the head is calculated at each flow rate, this head requirement does represent the entire system resistance and elevation change seen by that specific pump.

Overall, obtaining a composite pump curve and composite system curve for pumps operating in series in AFT Fathom is not too complicated. Well, AFT Fathom does it all for you! But now it should be better understood what AFT Fathom is doing in the background to generate these curves.

Onto the next part of the discussion regarding multiple pumps operating in parallel. The rest of the article will cover the following points.

The operating point for the simple pipeline in Figure 3 below is 500 GPM and the pump adds 245 feet of Total Dynamic Head (TDH). At the operating point, the pump operates at its Best Efficiency Point (BEP) because the pump was properly sized and selected for this pipeline.

Figure 3 - Simple pipeline with a single pump operating to establish base case for operating multiple pumps in parallel with this system.

To deliver more flow through a system, a potential solution is to add a second pump in parallel. The traditional thought is that the pump curves are additive in terms of flow like in Figure 4. But how much more flow will they add? Let's say there is a new flow demand in our pipeline from Figure 3 for 50% more flow of 750 GPM. Figure 5 A represents the attempt to add an identical pump in a parallel configuration with symmetrical piping. 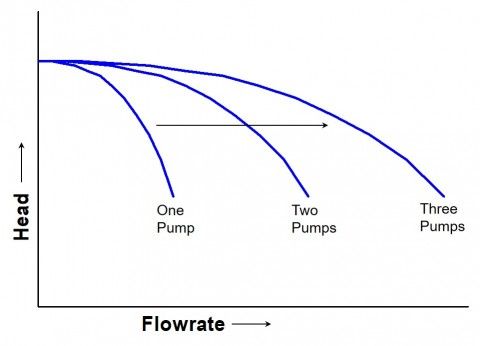 Figure 4 - Conceptual operation of multiple pumps in parallel with the goal to increase flow. Pump curves add to the right with respect to flow at a given pump head.

Figure 5A - Models two pumps in parallel with symmetrical piping.

As you can see, the increase in flow through the pipeline is far less than what we were hoping for. We only got about 24% more flow with a second pump in parallel as in Figure 5 A and we were hoping for 50% more flow. Clearly, the flow did not double, which is sometimes expected. Also, be sure to notice that the pumps are now operating much further away from their BEP. Figure 5 B models three identical pumps in parallel with non-symmetrical piping which only generates 3% more flow, increasing from 619 GPM with two parallel pumps to 634 GPM with three parallel pumps! Very quickly we approach a point of diminishing return where adding more pumps does not generate that much more flow. 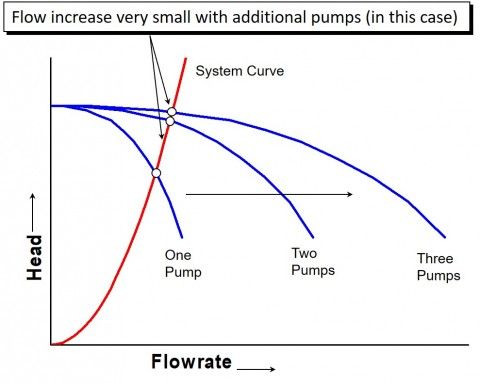 Figure 6A - Steep system curve for frictionally dominated system where additional pumps do not add much increase in flow. 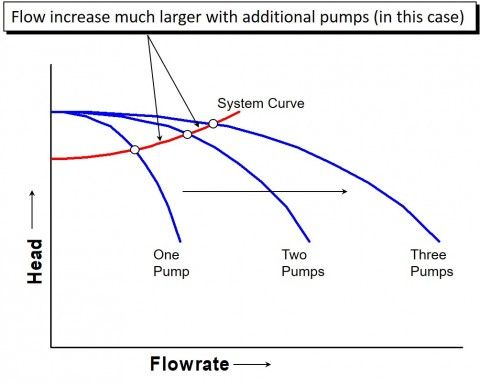 Figure 6B - Flatter system curve for static dominated system in bottom image where multiple pumps in parallel can help increase in system flow.

Figure 7 shows the pump and system curves plotted together for our pipeline in Figure 3 with one pump operating, Figure 5A with two pumps operating in parallel, and Figure 5B with three pumps operating in parallel. The pump curves are added together for operating two and three pumps in parallel. Although the piping at the pumps is slightly different for each configuration from using one to three pumps, the system curve is essentially the same. Although the system curve does not appear to be very steep, you can see that the frictional losses become more significant when attempting to deliver more flow through the system with additional pumps.

Table 1 provides a summary of the operating points for each configuration. Notice how much further away from BEP each pump operates with two or three pumps in parallel. More flow at the expense of reliability is probably not worth it.

There are two methods that AFT Fathom uses to generate the composite pump & system curves for parallel pump operation. They are referred to as the "Traditional Method" and "Enhanced Method".

The traditional method is accurate and works well when the pumps operating in parallel are identical to the manufacturer, model, pump curve, etc. as well as when the pump piping through each parallel path is symmetrical.

Composite system curves generated using the "Enhanced Method" will determine the flow split through each parallel pump at the operating point. Then, assuming the flow split remains the same across the entire range of flows, the same flow split ratio is apportioned to each pump accordingly when calculating the required pump head for each pump. Those pump heads are then averaged together.

If the pumps are identical and the suction and discharge piping is symmetrical, then the composite pump curves and system curves will be the same when using either the Traditional or Enhanced methods.

A case when the composite pump vs. system curves can be different between the Traditional and Enhanced methods is when dissimilar pumps are operating in parallel. This is well illustrated with the AFT Fathom Example Help File model called the "Hot Water System", as shown in Figure 8. The problem statement and goals of that example are slightly different than the purpose for this blog series. I modified the system by setting the Special Condition of the Control Valves to "Fully Open – No Control" and I changed the pump curves so that the system is operating three different pumps in parallel. 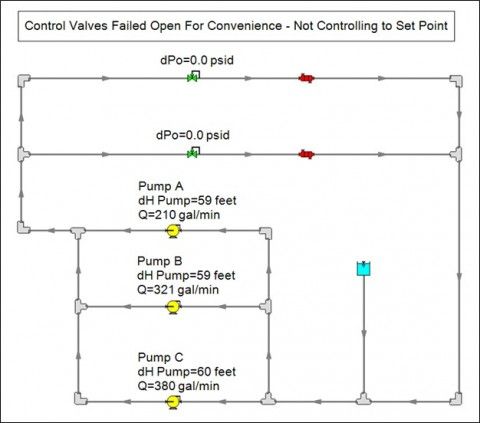 The Composite Pump Curve with the Traditional Method does NOT cross the Composite System curve at the total flow rate for each pump. This is where some ambiguity lies regarding generating composite pump and system curves for operating dissimilar pumps in parallel.

Figure 9 - Pump and system curves plotted for operating three dissimilar pumps in parallel with non-symmetrical piping in Figure 8. Note the differences where the composite pump curves cross the composite system curves with respect to Enhanced vs. Traditional Methods for parallel curve generation.

Overall, operating dissimilar pumps in parallel or pumps in parallel with non-symmetrical piping should be avoided. This can lead to some ambiguity when there are multiple ways the composite curves can be generated and how sometimes the composite curves may not cross at the operating point. But more importantly, the pumps would tend to "compete" with each other for a dominating flow rate. This is an issue because it can cause one of the pumps to operate closer to its BEP than the other(s). This can lead to reliability problems for the pumps that operate further away from BEP as they experience various issues such as those discussed in this blog here. The pumps will not wear evenly and ultimately will lead to increased repair costs, more down time, loss profits, production losses, etc.

This concludes this article regarding pump and system interaction for pumps in series and parallel configuration as well as the "Know Your Pump & System Curve" blog series. Hopefully, this helps clear up the various nuances that can be sometimes confusing for generating pump and system curves. Thank you very much for reading!