Dec 21 Posted by Applied Flow Technology in Tips and Tricks

The Three Way Valve Properties Window shows the three connecting pipes in drop-down lists, which allows users to specify which pipe is the combined flow pipe, and which two are the split flow pipes. By entering the loss profile through each flow path, and then by selecting the actual percent open, Fathom will calculate the actual loss values for each flow path. 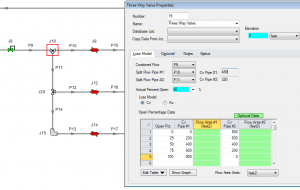