Welcome to the Applied Flow Technology Blog where you will find the latest news and training on how to use AFT Fathom, AFT Arrow, AFT Impulse, AFT xStream and other AFT software products.
Categories
Tags
Authors
Font size: + –
Print
9 minutes reading time (1733 words)

The term cavitation is thrown around frequently when talking about the effects that transient events have on piping systems. It is widely and correctly understood to be something that can be harmful to pumps and pipes, but how to predict and calculate cavitation is not something that is as equally understood. In this blog, we will dive into what cavitation is, the two cavitation models that AFT Impulse offers, the differences between the two, and which one you should use in your model.

Conversely, instead of raising the temperature of water to bring it to boiling, the pressure can be lowered to get the same effect. Imagine if you are at sea level and you have a pot of water at 205 deg. F (96 deg. C), the water will be hot, but it will not be boiling. If you keep water at that constant temperature and then start driving up a mountain to get to higher elevation, thus lowering the pressure, at some point the water will begin to boil – and the temperature never changed. By the time you get to Colorado Springs, all the water will be completely vaporized. This change in pressure relationship more closely resembles cavitation when it occurs in a piping system.

In a piping system, a transient event such as a pump trip or valve closure can trigger high- and low-pressure waves to propagate through the system. If one of the low-pressure waves causes the static pressure of the fluid at a particular point to fall below the vapor pressure of the fluid, then the fluid will begin to boil, or cavitate, at that point. However, unlike a pot of water that just allows to vapor to escape freely, there is nowhere for the vapor to escape to. Consequently, when the pressure increases again, the trapped vapor cavity rapidly collapses. This causes significant pressure spikes that can damage pitting on pipe walls, impellers, and valves. Thus, it is important to model these transient effects in order to understand if and where cavitation occurs to avoid costly damage to equipment.

In order to perform the complex calculations of a transient system, AFT Impulse splits a pipe into multiple computing sections. The endpoints of each section is a station. AFT Impulse accounts for cavitation by modeling vapor formation only at these computation stations, x0, x1, x2, etc in Figure 1. AFT Impulse also assumes that the pipe remains liquid-full, and the vapor stays fixed at the station and cannot travel through the pipe.

For example, observed cavitation in a pipe will take place over some volume of the pipe, displacing some of the volume that would otherwise be full of liquid. However, AFT Impulse models cavitation by assuming that cavitation is occurring at the pipe stations, as shown in Figure 1, in order to calculate the effects of cavitation while adhering to the engineering assumptions as much as possible. 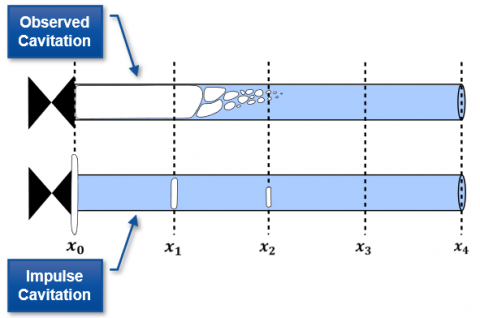 What is the Discrete Vapor Cavity Model (DVCM)?

When cavitation is occurring in AFT Impulse, the vapor cavities are considered pure vapor at the vapor pressure itself and the solver uses that pressure as a new boundary condition at that point. In other words, AFT Impulse acts as if there is a fixed pressure equal to the vapor pressure at the station that is cavitating. With DVCM, pressure waves cannot travel across cavitating pipe sections making the pipe sections upstream and downstream of the cavitating section completely isolated from each other. A pressure wave will be reflected by the cavitation occurring at a station. This cavitation model is relatively less intensive, making it the default model for AFT Impulse.

What is the Discrete Gas Cavity Model (DGCM)?

The Discrete Gas Cavity Model, or DGCM, is a more advanced cavitation model. This model considers that vapor could be forming when the static pressure of the liquid is close to, but not yet at, vapor pressure. After all, liquid flow generally is not pure liquid as there is some amount of dissolved gas in most liquids. As the static pressure falls, the dissolved gas expands and comes out of the liquid to form bubbles. DGCM attempts to capture the gas formation prior to full vaporization.

Unlike DVCM, where pressure waves are reflected due to cavitation, the gas bubbles calculated in DGCM will have an effect of wavespeed. However, in order to maintain AFT Impulse's liquid-full assumption, DGCM coalesces the gas into a discrete volume at the computation station, just like DVCM.

DGCM has three input parameters associated with it. The default values are typically sufficient for the vast majority of models and should not be changed without first discussing it with AFT Support. These parameters, shown in Figure 2, are: 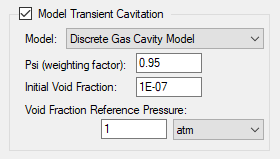 The impact that these differences have can be significant. With DVCM, vapor formation begins instantaneously when the static pressure falls below the vapor pressure and likewise the vapor collapses instantly once the static pressure rises again. This rapid vapor collapse can create artificial pressure waves in the system, meaning these waves exists in the numerical computation only and not in an actual system. These artificial waves manifest as numerical noise in the system. Modeling free gas expansion with DGCM can better capture real system behavior by eliminating this source of noise.

The impact that these differences have can also be significant. DVCM can create noise as pressure waves from instantly collapsing vapor cavities create new vapor cavities at other stations, which likewise collapse and create more waves, which repeats the process. This cause-and-effect is known as pinging and is a purely computational behavior. DGCM better captures the behavior of a real system where waves will be partially transmitted and partially reflected through cavitating areas without pinging.

Which model should I use?

Systems vary greatly in the amount of cavitation that may occur during transient events. In systems with brief or no cavitation, DVCM is recommended because it is significantly less computationally intensive and can still provide highly accurate results. When there is extensive cavitation or when DVCM shows noise or chattering behavior, DGCM should be used.

As with most modeling alternatives, it is always a good idea to run scenarios with each cavitation model. If the two models agree, a high confidence can be assigned to the results. If DGCM shows a similar response to DVCM, but with less noise, place more confidence in the DGCM results. In the end, interpreting cavitation results can be difficult. Experience comes with time and practice.

Tweet
Tags:
AFT Impulse DGCM DVCM cavitation discrete gas cavity model discrete vapor cavity model static pressure
To Affinity and Beyond!
Is there steam on your (Microsoft) Windows? How AS...

Kyle Clark is an Applications Engineer. He is a graduate of Texas A&M University - College Station with a Bachelor's degree in Chemical Engineering. Kyle came to AFT from ExxonMobil where he worked as an Offsites & Utilities Engineer in their Project Development Division. At AFT, Kyle supports AFT users around the world to troubleshoot models, help test and document software, and much more.

More posts from author
Monday, 14 February 2022 To Affinity and Beyond!
Monday, 16 August 2021 Get the Most Out of AFT's Fluid Property Viewers
Friday, 30 April 2021 The Eductor Educator