You’ve built your AFT Fathom or AFT Arrow model, defined all pipes and junctions, specified your fluid properties and defined your pressure boundary conditions. But for some reason, your predicted flows are still not matching measured data. AFT Fathom or AFT Arrow is properly solving the fundamental equations, but it is likely that something is off in the inputted data. In many cases, this is the pipe’s resistance. Many factors can alter a pipe’s resistance, but the two primary reasons resistance may be incorrect is (1) corrosion of the pipe over time, which increases a pipe’s absolute roughness and (2) the buildup of residue on the walls of the pipeline, known as scaling, which decreases a pipe’s inner diameter. This decrease in diameter is very important and will increase a pipe’s resistance dramatically. Now you have a dilemma. You can’t cut open your pipe to see how much scaling there is or how much your pipe has corroded. What is the condition of your pipe? Using AFT Fathom GSC or AFT Arrow GSC, you can find out!

What is GSC? GSC stands for Goal Seek and Control and is an add-on module for both AFT Fathom and AFT Arrow that automates the search for input parameters to achieve desired output. In other words, it allows the user to define a set of model input variables that are changed until a set of output goals are reached.

The first step toward calibrating your model using GSC is building a completely defined model. In my AFT Fathom example model, I have an oil pipeline with two 50-mile-long gathering lines that feed into a single 50-mile-long delivery line.

It is known that only 32,000 barrels/day are flowing through line A, but the flowrate AFT Fathom is predicting is above 36,000 barrels/day. It appears that residue has built up during the pipe’s lifecycle, and the decreased diameter of the pipeline is restricting the flow through the line.

The flow in line B is predicted to flow above 29,000 barrels/day, but measured data is showing that flow is only 23,000 barrels/day. Here it would seem that scaling has also occurred.

Using the “Goal Seek and Control Manager” window—available in the Analysis menu after GSC has been activated—the user can define their variables and goals. In this specific case, the variable is “ID Reduction (Scaling).” This will vary the inner diameter of both Line A and Line B until the output matches the specified goals. 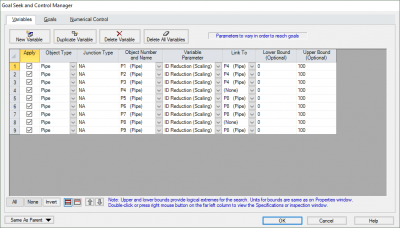 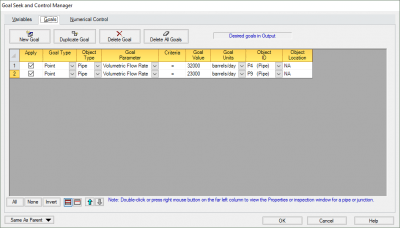 Each object that is used as a variable will have a red V next to the object’s ID, and if the object is a goal, it will have a red G.Now that GSC is completely specified, the model can be run again. It will take longer to run than a normal steady-state run, but that is because AFT Fathom is testing the possible combinations of input variables that will achieve the specified goal. Once AFT Fathom converges, you can view the GSC Variables Summary and GSC Goals Summary in the Output Primary Window. 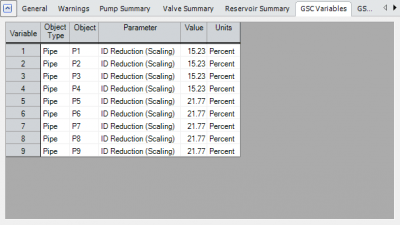 The GSC Variables Summary displays the final amount of ID reduction that occurred in the two lines. It can be seen that the inner diameter of Line A has decreased 15.23% from the original pipe. Line B had even more scaling with a 21.77% reduction.

If we want to add scaling in the delivery line as a variable, we need a new goal to keep a 1:1 ratio of variable to goals. The first thought might be that we could use flow again. We know the flow in the line; why don’t we use that? It is possible to define a model this way, but the results would not be unique. This is because the flow has already been defined in the delivery point by the other two goals. The flow already has to equal the sum of the two flows because of conservation of mass. A new goal is required. This means another measurement is required. If flow is already known, then pressure is a great measurement to take.

Downstream from the tee, there is a pressure gauge reading 965 psig. This measured pressure is an excellent goal to use, as it is a reading taken directly from the line we are trying to calibrate. The new variables and goals will appear as below: 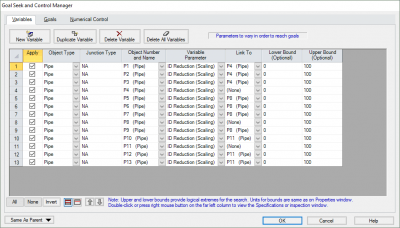 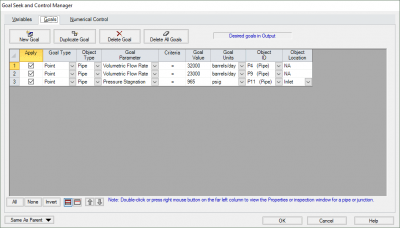 After rerunning the model with these variables and goals, it is easy to see that the scaling in the delivery pipe does in fact have a significant effect on the overall system’s scaling. 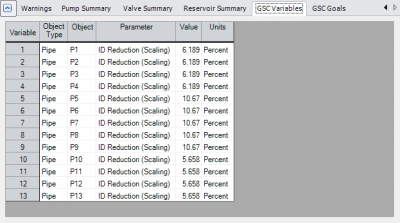 What are the possible ramifications of this study? One possible result is financially justifying pigging the line. You have the math to say, “We could get more than 10,000 extra barrels per day by just pigging the line.” Perhaps the current flowrates are acceptable, but using this model, you could monitor how the flow degrades over time and better plan out when the line should be cleaned. Another possibility is after pigging the lines, one of the lines is still failing to deliver the predicted flow. This could be the result of a leak or a highly corroded pipe, and using GSC could help identify the problem area.

In summary, AFT Fathom GSC and AFT Arrow GSC are great tools to help augment the already powerful capabilities of the software. They continually improve the efficiency of the engineer using the software for increased sustainability and operational benefits.

Dylan actively works to improve AFT customers' experiences as an Applications Engineer. He quickly troubleshoots models and teaches hydraulic concepts and modeling techniques to other engineers over the phone and at AFT seminars. Dylan is currently pursuing licensure as a Professional Engineer in the state of Colorado. He holds a Bachelor's of Science in Mechanical Engineering (2014) from Colorado School of Mines.

(Almost) Live Report From the HUUUUGE MINExpo in Las Vegas

A Meeting You Won’t Dread Attending!

A Personal Experience: The Mismatched Compressor and Air Distribution System in My Home

A Triple Choke Example: Why Getting Choked Flow Right Matters

Dylan--I'm trying to apply GSC scaling on a completely defined suction model, but the only variables I can specify are for junctions, not pipes. Is there something I'm missing? Currently using AFT Fathom 8.

Cancel Reply
Dylan--I'm trying to apply GSC scaling on a completely defined suction model, but the only variables I can specify are for junctions, not pipes. Is there something I'm missing? Currently using AFT Fathom 8.
Cancel Update Comment

Using pipe parameters such as roughness, scaling, design factor, or insulation thickness as variables for GSC is a new feature that was released with AFT Fathom 9. If you have questions about upgrading you can contact us at sales@aft.com or support@aft.com.

Cancel Reply
Hi Caitlyn, Using pipe parameters such as roughness, scaling, design factor, or insulation thickness as variables for GSC is a new feature that was released with AFT Fathom 9. If you have questions about upgrading you can contact us at sales@aft.com or support@aft.com.
Cancel Update Comment