AFT software products have had powerful graphing capabilities for a very long time.  Many types of graphs can be created with AFT products such as pump vs. system curves, profile plots along a flow path, gradelines and elevation profiles, transient plots (with AFT Impulse or the AFT Fathom XTS module), slurry system curves (with AFT Fathom SSL or AFT Impulse SSL modules), and selected solutions that allow you to plot various output parameters for desired pipes.

All of these graphing capabilities are incredibly important to engineers as they analyze the hydraulic behavior of their system.  The ability to customize the graphs in different ways so the appearance can be adjusted for reports is also highly valuable.  With all these powerful graphing features, the number of graphs an engineer might generate could possibly be endless!

So considering all the different graphs an engineer will generate, there will be types of graphs that they will commonly look at many times for any given model and it can become a bit taxing to have to re-define the desired graphing parameters every time they would like to generate a new graph.  This is where the ability to create Graph Sets has been extremely helpful!

The engineer only needs to define the graphing parameters and then generate the graph once.  Then, they will save that graph as a "Graph Set" which would be stored for later usage.  As shown in Figure 1, this model contains five different graph sets that can be quickly loaded and reviewed. 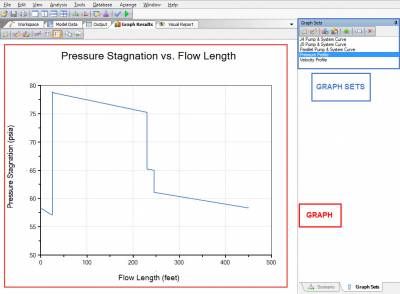 Now, here is one of the drawbacks to the graphing capabilities with the previous versions of our software, even though they were still quite powerful...You could only look at one graph at a time.  Generate a graph and review it.  Want to look at another graph?  Generate a new one and discard the old one.  Want to take advantage of the graph sets?  Load one...then load another...and another, etc.  Only one graph can be loaded at a time.

Wouldn't it be nice if you could load a whole bunch of graphs all at once so they would all be available for viewing at the same time instead of looking at each one individually?

Well, you're in luck!!  In AFT Fathom 9, and soon AFT Arrow 6 (schedule for release November-December 2015) and AFT Impulse 6 (scheduled for release first quarter 2016), you can do this! 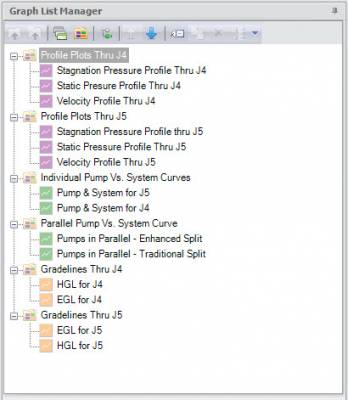 Each Graph Folder is not limited to only one type of graph.  You can add any/all of the different Graph Types into a single Graph Folder with no problem.

In the bottom left corner of the Graph Results window in Figure 3 is the "Graph Tab".  Each graph that you would generate would be on a separate Graph Tab, which is very similar to creating multiple tabs within Microsoft Excel.

Remember when I hypotetically asked, "Wouldn't it be nice if you could look at multiple graphs at the same time"?  Well, here's how you do it!  You can create multiple Graph Tabs and then Generate a separate graph in each one.  Or, you can make use of the Graph List Manager.

Loading multiple graphs within a Graph Folder onto separate tabs or even the same tab is where the new Graph Results window really shines.  Overall, I am certain that you will greatly enjoy playing with the new Graph List Manager and all the rest of the new graphing capabilities that exist!  These features will soon be available for AFT Arrow 6 and AFT Impulse 6.  Prepare yourself for a whole new world of more organized and efficient graphing!

How to Fill as Quadratic

Moving a Junction Without Moving the Pipe