​It was not intentional. The Trifecta I mean. It just sort of happened organically. But now that I have completed it, I think it is kind of cool.

There are three Space Shuttles that have flown into space and are now in American museums:

My Trifecta is that I visited all three and, moreover, all within the last 12 months. Today I finished the Trifecta when I visited Discovery. With a little research this evening I nailed down the day I witnessed Discovery land at Edwards Air Force Base in California. It was STS-29 which landed at 6:35AM PST on Saturday, March 13, 1989 (not 1988 as I previously guessed).

Today I saw Discovery again with my own eyes for the first time in 30 years. 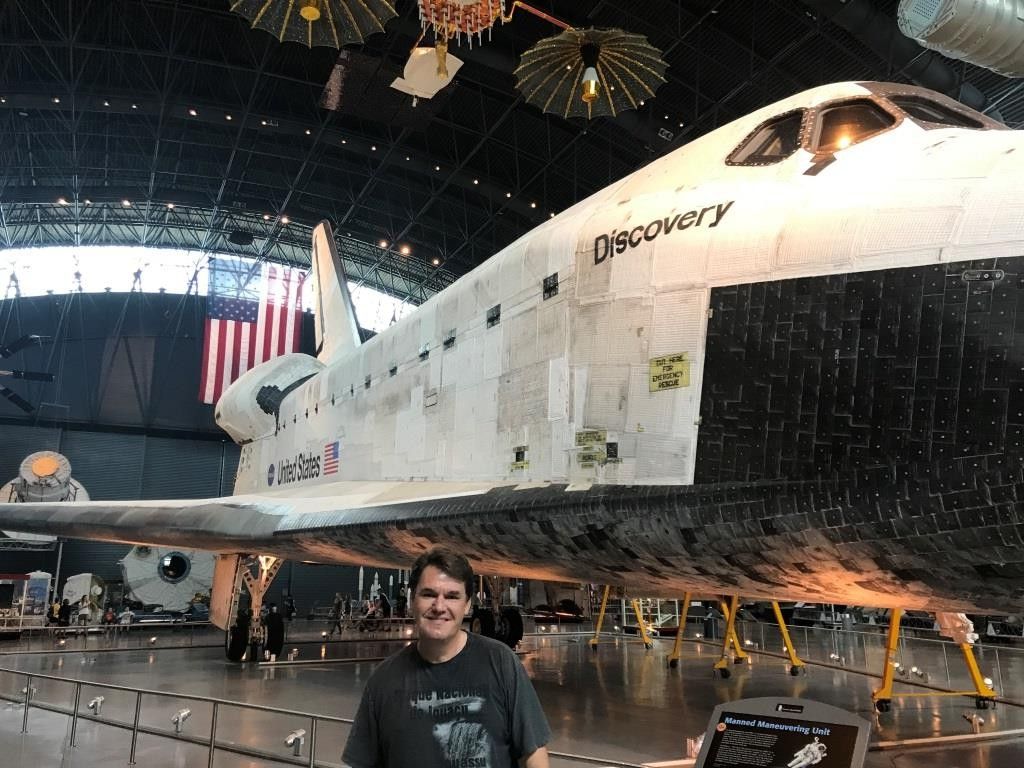 Me in the Smithsonian museum earlier today (June 18, 2019) at the Space Shuttle Discovery exhibit

The design of the Space Shuttle and ground launch systems in Florida happened long before I founded AFT in 1994. But NASA started using AFT software at Kennedy Space Center in 1996 and after that AFT had an impact on the Space Shuttle ground launch systems. In 2007 NASA redesigned the flame trench sound suppression system and used AFT Impulse for that. Discovery is featured in this AFT company video showing this system:

Three months ago in early March I had the good fortune to visit our friends and users at NASA Kennedy Space Center in Florida again. While there I had only a short time to see Atlantis and, alas, while I got some good photos, I did not get any selfies. I was in too much of a hurry it would seem. See below one of my photos.

I had last seen Atlantis with my own eyes in October 1996 - more recently than I last saw Discovery. That was an incredible up-close encounter inside the OPF (Orbiter Processing Facility) at KSC soon after it returned Shannon Lucid back from the Russian Mir Space Station (on STS-79). I had just taught a training class on AFT Fathom and AFT Arrow at NASA and got an absolutely phenomenal behind-the-scenes tour with NASA engineers. I won't put your names here but you all know who you are. Thanks again for that awesome experience! I owe all of you guys beer for life! 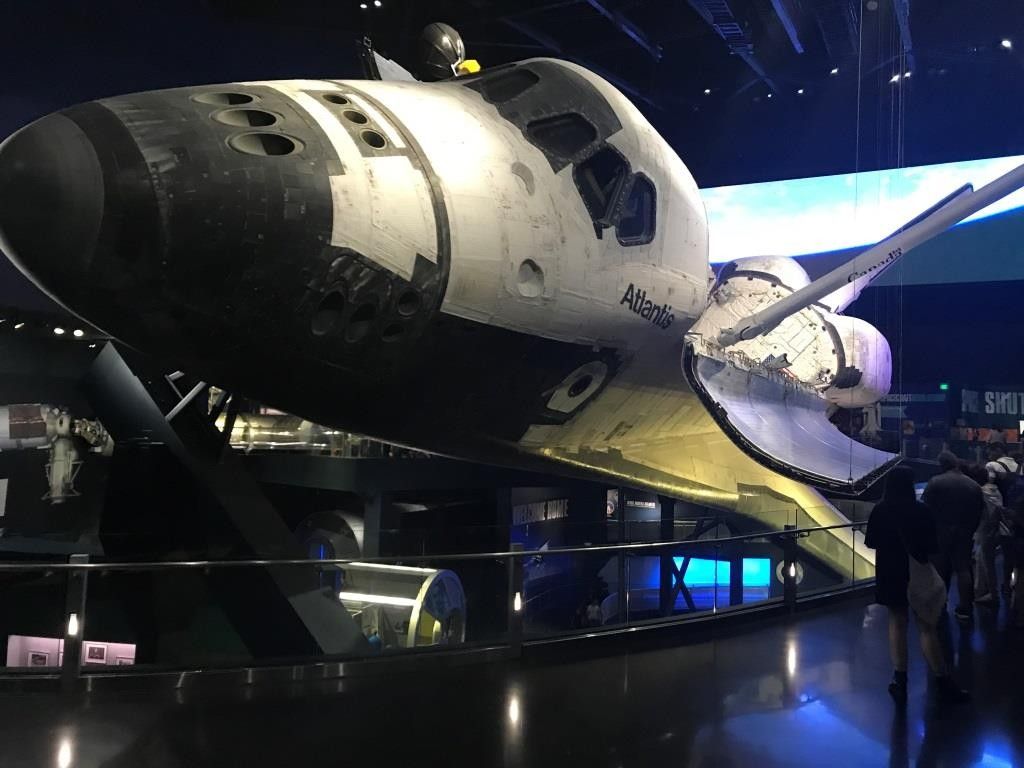 ​Last but not least is the Space Shuttle Endeavour. I saw that in Los Angeles last year on June 23, 2018, just five days shy of a year ago from today. That was special because I saw it with one of my sons. He is now working in the aerospace industry as an engineer and having a blast (no pun intended). This was the first time I ever saw Endeavour with my own eyes.

For the record, the Atlantis exhibit in Florida is by far the best of the three. However, the Endeavour exhibit in Los Angeles is only temporary. I understood from our visit that they are planning to build a new building there to show Endeavor upright and mounted to a real External Tank, along with some mock SRBs.

And that is my Space Shuttle Trifecta! Pretty cool, right? 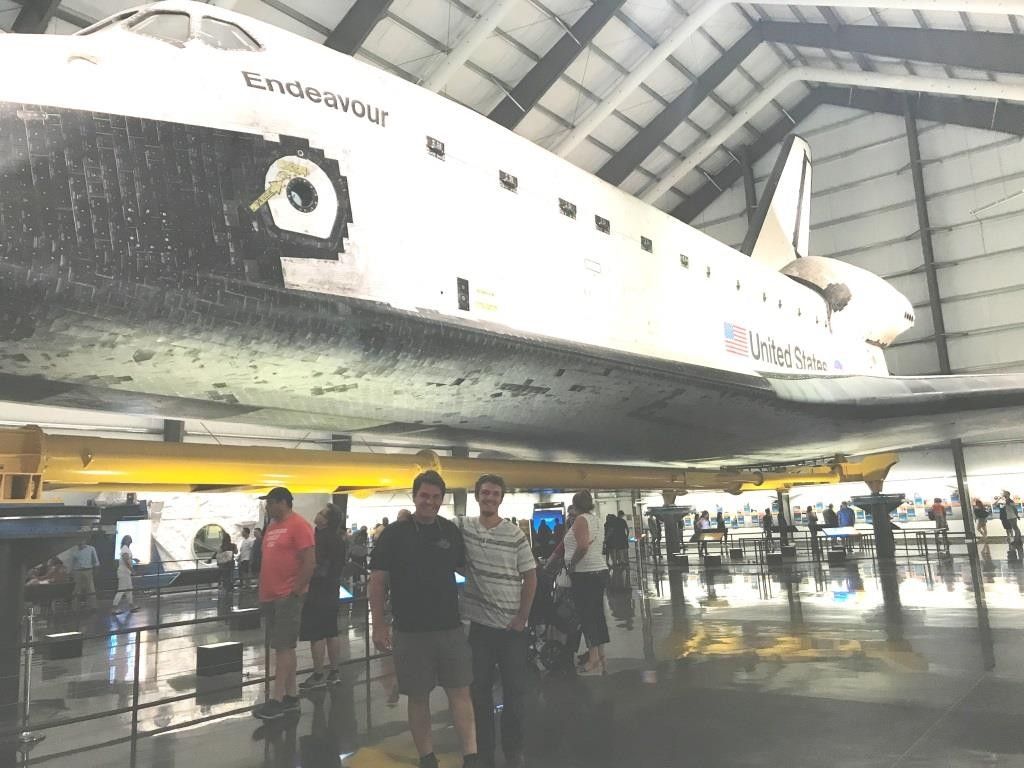 Me and my son at the Space Shuttle Endeavour exhibit in Los Angeles, June 23, 2018
Tweet
Two for One: How Dependent Design Cases Help Autom...
Applying the Improved ATKF Method for Laminar and ...