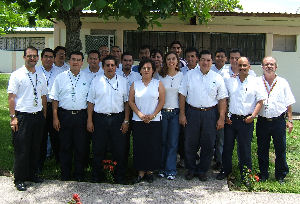 Held at the engineering offices in Dos Bocas, Mexico, the class was well attended and enthusiastically received by CFE's engineers with plans being developed for a second seminar covering both AFT Arrow and AFT Impulse.

Described as the world’s largest oil & gas event, the Global Petroleum Show presents the latest in oil & gas technology, products and services. Applied Flow Technology co-exhibited at this truly large event in Calgary with our distributor CodeCAD and COADE, developers of Caesar II pipe stress software. With both conventional oil fields and huge oil sand fields, Alberta is one of the major petroleum centers in the world with many involved engineering firms located in Calgary and nearby Edmonton. It was a great opportunity to meet a number of AFT's many customers in the area and find out more about their many interesting piping and pump system modeling applications.

Held at the engineering offices in Dos Bocas, Mexico, the class was well attended and enthusiastically received by CFE's engineers with plans being developed for a second seminar covering both AFT Arrow and AFT Impulse.

PSIM may be freely downloaded from the PSM website.

Tip of the Month - Using Animated Graphs in AFT Impulse

As will all AFT flow modeling software, AFT Impulse includes comprehensive graphing capabilities. Most users are familiar with the traditional time and profile graphs, the first graphing a selected parameter vs. time and the second vs. distance (along a selected flow path). Animated graph output provides a means to view both at the same time.

To generate animated graphs all of the stations of the pipes in the flow path to be graphed must be saved. By default AFT Impulse saves the pipe inlet and outlet data to the output file. To change this go to Analysis / Transient Control. Increasing the number of stations saved to the output file will increase your output file save (which is indicated in the lower left hand corner of Transient Control). While it is faster to simply change all pipes to all stations, you can minimize the size of your output file by changing only those pipes in the flow path or paths you wish to animate to all stations.

With Transient Control set and output available, select the flow path of interest. From the Window menu select Graph Results and open Select Graph Data either from the toolbar or the View menu and select the Profile Along a Flow Path tab. If your model has only one flow path you can simply click the 'All' button to select all the pipes. If the model has branching you'll need to select the specific pipes in the flow path of interest. This can be done by either selecting the pipes in the Workspace and then clicking the 'Workspace' button or, if you're going to want to select them more than once, select the pipes on the Workspace and create a named group.

Next, select the parameter to be graphed (for example, Pressure Static) and in the Parameter Values area below check either 'Animate Using Output File' or 'Animate Using Solver'. Unless your model is fairly small, you'll want to select to select the first option. Click 'Show' and the Graph Results window will be displayed. At first glance you may think this is like any other profile graph, until you notice the player controls at the top of the window. With these controls you can play, pause or stop the animation. A slider control lets you jump to a particular time step and the speed control allows you to control the animation speed or frame rate.

Another advantage of saving pipes in a flow path as group, beside easier re-selection, is that you can graph multiple flow paths simultaneously if they are named groups. This works for either static profile or animated graphs. If your model contains one or more named groups, Select Graph Data will show the 'Plot Multiple Paths Using Groups' option in addition to 'Plot Single Path'. Check the multiple path option and the list below will display the named groups in your model from which you may select those that represent the flow paths you wish to graph. For example, two groups could include pipes starting at a pump discharge and extending to two separate delivery points downstream. Pipes from the pump discharge to the branch point where the paths separate will be common to both groups and pipes after the branch point unique to each group.

Whether graphing one or multiple flow paths, animated profile graphs can provide key insight into understanding the dynamic nature of your system and its response to transient events.